Don't just buy any 10W30 oil for your vehicle. Buy from the pioneer of synthetic oils. 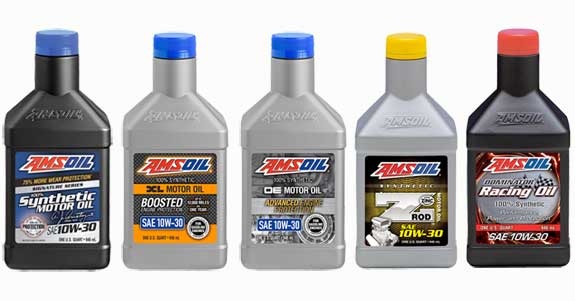 Many types available depending on usage

Which oil do you need? Long commuter? 10,000 mile oil? OEM drain interval? Old street rod? High performance racing oil? We got them all!

A company of firsts

AMSOIL produced the very first fully synthetic oil for automobiles in the United States, hence the trademark, "First in Synthetics".

With lots of other engine oils to pick from, why choose AMSOIL?

Our oils are over-engineered to exceed engine manufacturers specifications.

Made in the USA

Formulated, blended and packed here in the United States.

Don't take our word for it. We have our oils and the competition tested on ASTM testing machines to ensure our oil beats other synthetic oils.

Our oils have been tested over billions of miles without a single oil-related oil failure.

What Our Clients Say

Has over 500,000 miles on his 1998 Toyota Tacoma.
"The truck, with its six-cylinder engine, and five-speed tranny, is a workhorse that consistently hauls heavy loads through hilly territory, he said. It had 70,000 miles on the engine when he bought it in late 2005. The odometer recently turned over to 508,000 miles."
Brock Fraser of Las Vegas
Entrepreneur